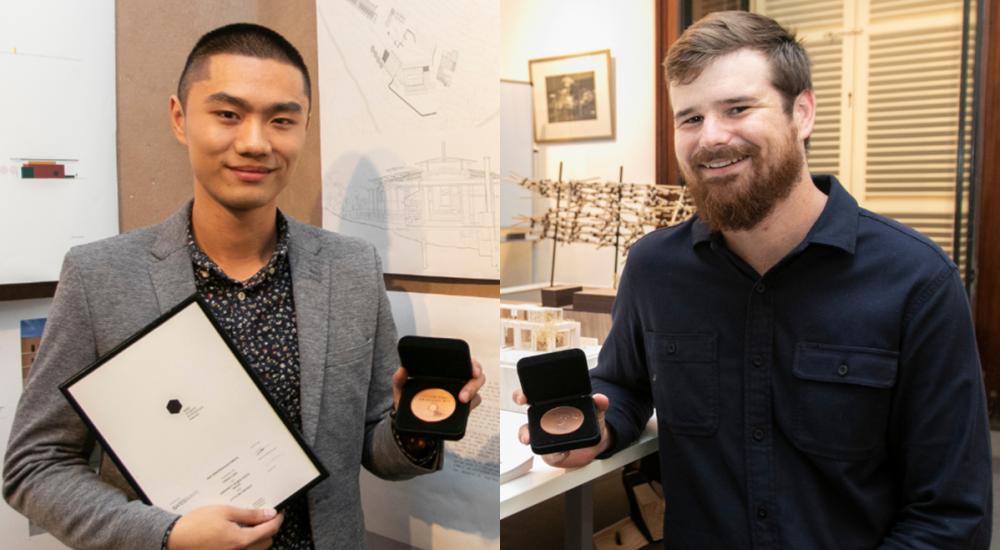 Dr Philip Oldfield, Associate Professor and Director of the Architecture Program, says that UNSW students receiving acknowledgement for their designs in both categories is impressive.

“We’re delighted to see our students receive such recognition. The graduate and undergraduate medals represent the jury’s pick for the best architecture projects from all four NSW architecture programs across the state,” Dr Oldfield says.

“For our students to win both awards is a wonderful reflection on their ability as designers, but also their ambition, dedication and graphical style.”

Master of Architecture graduate Joshua Sleight received the Graduate Medal for his project No ‘us’ and ‘them’ inspired by working with the Wayside Chapel Community Service Centre in Bondi, providing community services to the eastern suburbs since 1964.

The winning project explores issues that impact people from all aspects of life.

The jury's citation from the AIA describes Mr Sleight’s work as “a disarmingly powerful demonstration of the potential for architecture, to respond to major social problems through small, beautiful and cumulative spatial moves.”

Mr Sleight says his master plan for Bondi is staggered across time, reflecting lessons learnt from its fine grain development.

“First a place to gather, talk and listen is offered; a public forum to generate debate with varied spaces to continue the conversation,” he says.

“Second is a living room for Bondi that investigates levels of privacy and connection between traditionally segregated groups; a drop-in space interacts with a day-care centre which in turn links to a domestic violence shelter.”

“Inhabitants always have the choice to actively take part, hide away or just hover on the edge and observe,” he says.

He says the end result of the design was an exploration of possibilities in architecture.

“Joshua is an exceptional architect. His project is a great example of excellent design resulting from putting people first,” Professor Sanderson says.

Mr Sleight received the highest mark of UNSW Architecture students in 2018 and will return to UNSW to guest tutor at the social agency studio.

The jury's citation from the AIA describes his project as “an overnight accommodation for walkers travelling along the coastal trails, takes us on an ethereal journey that demonstrates a level of sophisticated elegance and architectural rigour.”

“The design evokes a purposeful craftsmanship that rejuvenates the body both physically and mentally – a well-deserved winner of the NSW Undergraduate Medal.”

Mr Tang says his design concept is meant to be celebrated when occupied and camouflaged when vacant.

“It’s wonderful to have your efforts and beliefs recognised and validated,” Mr Tang says.

“I was inspired by mindfulness and awareness, I wanted to create an event  [human situation] which celebrates habitation and a form that honours the exquisite site.”

Bachelor of Architectural Studies student Shuyang Liang received a commendation for her design Urban Studio for the Undergraduate Medal.

“The winning projects are beautifully crafted, presented with style and flair – but they also aim to tackle very real problems that our cities and architects are facing now, and in the future,” he says.

“Future architecture graduates will need to be creative thinkers, problem solvers, have an interest in how people occupy the city and a fierce concern for the environment.”

“Architecture is a wonderful career as it not only allows you to be part of these grand global challenges, but also to positively impact the everyday lives of people, from how they live in their homes, to how they move around the city, to where they work.”