Sustainable Built Environment
My current role as CEO of the Co-operative Research Centre for Low Carbon Living (CRCLCL) embodies the research agenda of my entire career: advocating for and creating sustainable, low-carbon buildings and cities.
The CRCLCL is the largest research innovation hub working in the built environment field in Australia and consists of over 50 industry, government and academic partners doing applied, impactful research in all aspects of low-carbon living.
When I think about the big challenge of urbanisation and how we improve the quality of life of people in buildings and cities, I have always been aware of the interconnectedness of the built environment disciplines. Taking a multidisciplinary and collaborative approach to problem solving has always set my research apart.
My three decades contribution has been recognised nationally through multiple high-profile awards including the highest accolade in the country, the Order of Australia.
Room:
3001
Building:
Red Centre Building
Kensington
Phone:
+61 2 9385 4868
Fax:
+ 61 2 9385 6735
d.prasad@unsw.edu.au 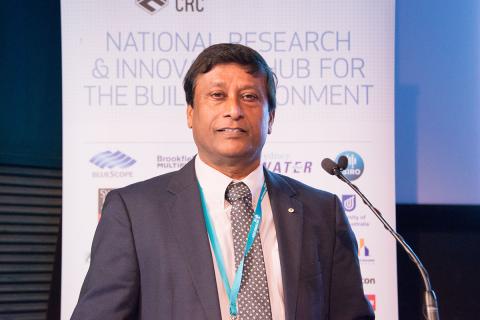 Bio:
Distinguished Professor (Scientia) Deo Prasad AO FTSE is now an international authority and recognised as a national leader in the field of sustainable buildings and cities and among the leading advocates for sustainability in Australia, with his contributions having been widely acknowledged at all levels of government and professions in Australia. Elected as a Fellow of the Royal Australian Institute of Architects in 1991, he has been a highly influential, driving force for sustainable design in both academia and professional practise and in 2006 he received the Royal Australian Institute of Architect’s National Education Award for contribution to ‘sustainability education, research and design’. In 2004 he received the NSW State Government’s individual GreenGlobe Award for ‘leadership and commitment to the supply of renewable energy’ He has also won the Federal Government’s national award for ‘outstanding contribution to energy related research’. He is a regular contributor to debate in this area in local and international media.
Deo is the Chief Investigator and CEO of the Co-operative Research Centre for Low Carbon Living (CRCLCL: www.lowcarbonlivingcrc.com.au). This is the largest ever industry-government-professions-research collaboration spin-off in Australia (built environment sector) and is leading to transformative impacts – enabling Australian industry and professions to compete globally in a low carbon future. He is also one of the Ambassadors for Sydney (Business Events, NSW Govt) with special focus on promoting Sydney as a destination for high end environmental-scientific events. In 2014 he was awarded the Outstanding Alumni Award for contributions in the field of sustainability by the UNSW.
On Australia Day 2014 Deo was honoured as an Officer of the Order of Australia by the Governor General of Australia for services to sustainability and renewable energy through his research and for extensive international community work. This is the highest accolade given in Australia. Most recently, he was elected as a learned Fellow of the Australian Academy of Technological Sciences and Engineering in 2014.
Deo has been an outstanding teacher and researcher during his 28 years at University of New South Wales, Sydney Faculty of the Built Environment. Deo has published in excess of 280 key publications on the subject (including six books, about 30 chapters in books, numerous key journal papers and refereed conference papers – among the highest in the country in architecture) and is a regular keynote invited speaker at conferences globally, in this field. Deo also developed and led the first Master in Sustainable Built Environments Program at UNSW since 1998 – first such program in the southern hemisphere). Deo headed the leading research group SOLARCH for 15 years producing among the early notable projects and publications in sustainability 1995 to 2010. He then created the national research and innovation hub – the CRC for Low Carbon Living which brought together five universities, CSIRO and around 45 industry and government bodies to conduct end user driven research where the measure of success is its impacts. Deo has supervised more than 100 masters students and more than 30 higher degree doctoral students – his students’ work places have varied from the ‘White House’ energy initiative in USA to the Energy Directorate in the European Union to many professors and other professionals in around 25 countries. Deo has been a member of many Boards and government committees as summarised overleaf.
Professor Prasad’s contributions to the advancement of sustainability of the built environment have been so extensive that it is difficult to summarise in one page. In summary, over a period of more than 28 years Professor Deo Prasad has made truly world-class contributions to the advancement of sustainability of the built environment. As such, he would be an exceptional candidate for such an award.
Research Activities:

Professor Deo Prasad has made outstanding contributions to the field of green buildings research in Australia. He is a passionate advocate of sustainable built environments internationally. Deo's key contributions are in the area of sustainable buildings, its key indicators and synthesising these into either assessment tools or building design. With qualifications in architecture, management and engineering he has a unique perspective on integrating multi-disciplinary knowledge to achieve best outcomes. Deo was a co-author of the Australian Benchmark studies for greenhouse gas reductions in commercial buildings as per Kyoto targets (published by the Australian Greenhouse Office as a report in 1999 and the basis for a number of policy outcomes. Deo has conducted numerous case studies of all building types for their sustainability credentials (published by the Australian Council for Building Design Professions - EDGe Notes; 1995-2006). In fact he was one of the founding group of this very useful suite of Notes. Deo has been a consultant on the recent Building and Construction Authority, Singapore funded project conducted by National University of Singapore on GreenMark Evaluation.

BEIIC/DIISR, Canberra:  ‘Current Practice and New Strategies in Retrofitting Residential Housing and Precincts in the context of climate change’.

Deo brings to the architecture program a leading edge knowledge base and skills in ecologically sustainable design and evaluation. With a very strong research background in empirical and theoretical underpinnings of sustainability together with an ongoing high end consulting in this specialised area he is able to provide students with most pertinent knowledge and advanced tools in this area. He is able to enthuse students with his passion for the field of knowledge and engage them effectively in design. He focuses on the holistic and integrated nature of design and systems thinking as a vehicle for analysis and synthesis.

Environmental education has played a significant role in developing an awareness of the interconnectedness of natural systems, and their relationship to built environments. To educate for sustainability is to position the education process as one that facilitates the gaining of knowledge, values and skills to empower people to transform the society and its values as contributing members of the society. This emphasis on active participation across disciplines and issues recognises the approach’s inherent vision for personal and societal change in building a sustainable civil society.

In 2009 Deo was appointed an honorary ambassador for Sydney by the Business Events Sydney (NSW Government) to help in promoting Sydney as a high priority destination for scientific and other conferences and events.  He has chaired major congresses such as the Solar World Congress ( Adelaide 2001) and the Asia Pacific Solar Conference in Sydney (Sydney Darling Harbour 2008 and 2011).  Deo has Chaired the Australia New Zealand Solar Energy Society and been a Australian board member of the International Solar Energy Society. He also has been the Federal Minister of Energy’s appointment on the Board of Federal Government’s Energy Research and Development Corporation, elected Board member of the Sustainable Energy Industries Council of Australia and chaired the Standards Australia committee on energy in buildings.  Deo was the founding director of the NSW House Energy Rating Management Body (HMB) during which time it became a viable approach to sustainability assessment for buildings in Australia.  It now has been transferred to industry to run as a leading body underpinning building environmental assessment in Australia (ABSA).  During his time HMB helped create in excess of 220 small and medium businesses.   Deo also came up with the vision for the now national Sustainable Living Competition for high schools in Australia.  This is open to and engages all high school students in understanding and creating new paradigms for sustainable living in our communities.  This project was a finalist for Eureka Awards, 2001.  Deo has been part of numerous Australian Trade Delegations in the areas of clean energy/green buildings (eg Korea, Taiwan, Dubai & China).  Most recent of these include the Australian Academy of Technological Sciences and Engineering delegation to Korea on ‘Green Growth’ (2010) and he led the NSW Government delegation on Low Carbon cities to the World Expo in Shanghai in 2010.

Deo sits on numerous Boards and Advisory Committees in this field including the  National Science and Engineering Research Council of Canada’s Solar Buildings Research Network (Concordia Montreal – Board member and now Scientific Committee), United Nations Environment Program’s ‘UNEP Eco-Peace Leadership Centre’ Board (Seoul), ‘UNEP-Tongji Institute of Environment for Sustainable Development’ (Shanghai), ‘Beijing Energy and Environment Centre’ (part of Beijing City Government), ‘UNEP (Asia Pacific) Special committee on sustainable cities’ (Bangkok), ‘International Solar Energy Society Board’ (Freiburg, Germany), ‘National Fenestration Rating Council USA’ (expert) and BiPV expert panel on BCA Singapore Zero Energy Building.  Deo chaired the Asia Pacific Global Civil Society Forum for four years.  In this role he hosted the Asia Pacific meeting at UNSW, Sydney in 2008 on International Environmental Governance.  Deo is a consultant to a number of cities in Asia Pacific on sustainability matters through his work for the special committee of UNEP.  He recently convened a White Paper Series on sustainable cities (2009) for the UNEP and co-wrote the Green Universities Guide on Infrastructure Development (2012) for the Global Universities Partnership on Environment and Sustainability (GUPES/UNEP).  Deo regularly contributes to the work of International Energy Agency (IEA) in this area as well. He led an IEA expert task on building integrated photovoltaics and co-wrote a commissioned IEA book on the subject (designing with Solar Power) in 2004.  Since 2009 Deo has been on the Academic Advisory Board to the Council of the Universiti Technology Petronas – a group of eight Professors from around the world under the Chairmanship of Tun Dr Mahhatir Mohammed the current Chancellor of the university.  UTP has a goal of reaching the top 200 research universities by 2020 with considerable funding from their sponsor Petronas.

Deo is a consultant to a number of cities in Asia Pacific on sustainability matters through his work for the special committee of UNEP. He is currently convening a White Paper on sustainable cities for the UNEP. Deo regularly contributes to the work of the International Energy Agency (IEA) in this area as well. He led an IEA expert task on building integrated photovoltaics and co-wrote a commissioned IEA book on the subject in 2004.

He is a key contributor to the UN Decade for Education for Sustainability at international meetings as well as locally (member of the Australian Vice Chancellors Committee on sustainability education 2007). In 2009 Deo has been selected by the prestigious Asia Pacific Green Building Journal ‘FuturArc’ as one of only two Australians to rank among the 18 most influential people promoting sustainable buildings in the Asia Pacific region.